A few days ago we posted an article listing five steps to improve your chess, and in that article we promised to go into greater detail with regards to each step. Well, we keep our promises. Here we’re going to dip our toes into step one by taking a look at some beginner-level chess tactics. Later on we’ll get into some tougher territory, but for right now we’re sticking with the basics. So, here’s the first of many tactics to help you get better at chess! 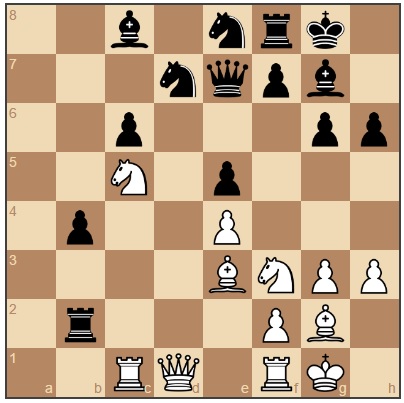 If you simply count the pieces on the board, white would appear to be losing, since black does, after all, have two more pawns than white. But this position is actually roughly equal, because white has a tactic they can play to even out the material. Can you find it?

Well? Confident in your answer? If you said white should play Nxd7, you’re correct. (Note: also correct would be Ne1, though for our demonstrative purposes here, Nxd7 is the move we’ll be examining.) But why Nxd7? It’s not as though this wins the knight on d7, since black can just recapture with either the queen or the bishop. It doesn’t matter too much which piece black uses to recapture, but let’s say black recaptures with the queen… 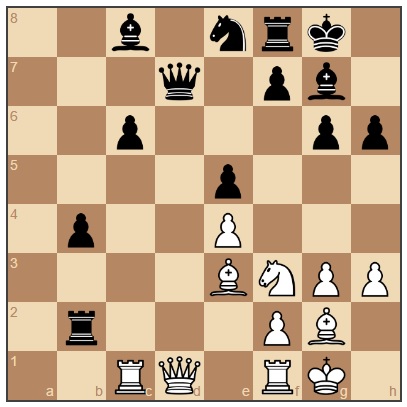 —See the rest of white’s tactic?

White traps the black rook on f8 with Bc5!

White wins the exchange with Bc5.

The point is that there is nothing black can do to save his trapped rook on f8, and will be forced to accept the weaker piece, white’s bishop, as an exchange for it. Note that black can’t block the attack with Nd6, as white can simply capture on that square with either that bishop or the queen, winning the knight for free.

But wait a minute? What if black had recaptured on d7 with the bishop rather than with the queen? That way black wouldn’t be exposing his trapped rook to the white bishop’s line of attack. It’s a nice try, but unfortunately for black, this wouldn’t work either, as we can see below…

Black can’t save the rook with Bxd7.

Bc5 still works, because now instead of attacking only the rook on f8, white’s bishop is attacking both the queen and the rook, and cannot be captured itself because it is protected by white’s rook on c1. So, unless black wants to lose the queen instead just the rook, the queen has to step aside, and just as in the earlier variation, white is free to take the rook on f8. This type of chess tactic, the one displayed in the image above, is what’s called a skewer. A skewer occurs when one piece attacks two others in a line, with the more valuable of the two forced to move out of the way, thus exposing the piece behind it.

Patterns like these: trapped pieces, skewers, and others that we’ll go over in future posts, are patterns that occur very often in chess games. Games are won and lost based on players’ abilities to recognize the opportunity to win material using these tactics. Good players see these opportunities over the board easily, like it’s second nature. This ability comes from solving countless puzzles like the one we just went over. If you struggled to find the moves here, don’t worry. It takes some time, but if you keep doing it, you are guaranteed to improve.

Alright, that does it for this tactic. There will be much more to come later!

Note: The images for the diagrams in this article were created using the board editor available for download on chessboardjs.com. These images are free to use under the MIT license.